Following a few months of poor results, we all had our fingers crossed for some better numbers in April. However as the poor weather continued we weren’t feeling that confident.

Surprisingly, April was actually a pretty good month – but not for everyone. Total sales value was up 7.4% Vs 2017, which meant the first increase in monthly performance this year. This drags back the annual number to -4.4%: still not great, but an improvement all the same.

So, is everyone happy?

Not entirely. The On-Course sales seem to have done better this month: up 15% compared with Off-Course, which was down by just 3% (again, an improvement over

recent months). The gains were mainly felt in hardware, so those retailers focusing on apparel or consumables won’t be feeling the benefits.

Weather stats would also suggest the South of England and Wales suffered more than the North and Scotland.

So, is everything up?

No. There are ups and downs across the board. Looking at our usual sales-change graphic, you can see that the two biggest categories drove the growth. WOODS and IRONS were both well up in value, so it seems the new launches are going very well.

There were also big jumps year on year in OUTERWEAR and WEDGES.

With a combined drop in BALLS and GLOVES, and an increase in OUTERWEAR and TOPS, it’s pretty clear that those that played golf needed protection. While a 4% drop in BALL units, On-Course, would suggest reductions in play year on year.

So, is the growth all from Average Sales Price (ASP), as it has been for the last year, or so?

Actually, some groups have had a real units increase. While prices are up, units have also seen some growth year on year. WOODS saw one of its biggest monthly gains in a long time: up 11% in units.

Two other crazy categories were OUTERWEAR, which was up 45%, and saw one of the largest ever monthly changes:  and DISTANCE DEVICES, which saw a real fall of 26% – year to date this is the worst performing category in value and units.

Not wanting to repeat myself but, yes, ASP is up in most of the key categories. IRONS, WOODS and WEDGES all saw double-digit gains in ASP. Average WOODS price is £224, including all categories – Drivers, Fairways and Hybrids. That is more than the average driver price a decade ago. 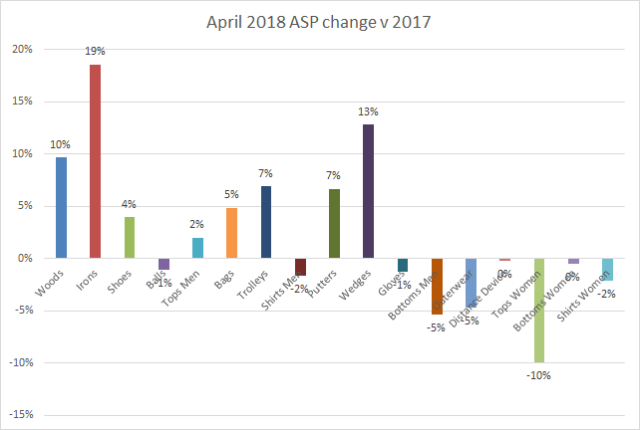 Another figure to note is the drop in ASP of OUTERWEAR, which has seen a 5% decrease Vs 2017. This seems to have come from some brand-swapping; with consumers willing to try other brands. It will be interesting to see if that continues or if it is just a promotional blip.

The weather was bad, so how did the On-Course categories still manage to sell more units?

Well, I think this might be one of the first years where we have seen that the effect of the On-Course indoor fitting studio.

On-Course saw an increase in units of 26% in WOODS and 12% in IRONS. Pros have been investing in indoor swing rooms and swing tracking devices for a number of years. With the weather relatively poor and traffic down, I have to assume that these facilities are paying dividends. On-Course retailers are now able to sell, and fit, customers out of the rain!

Well, we are getting into the core of the season now so I hope to see some increase in participation. May has been great so far, so let’s hope many have got out and given their new clubs a go. BALL and CLOTHING brands will certainly be looking for a bit of an up swing.