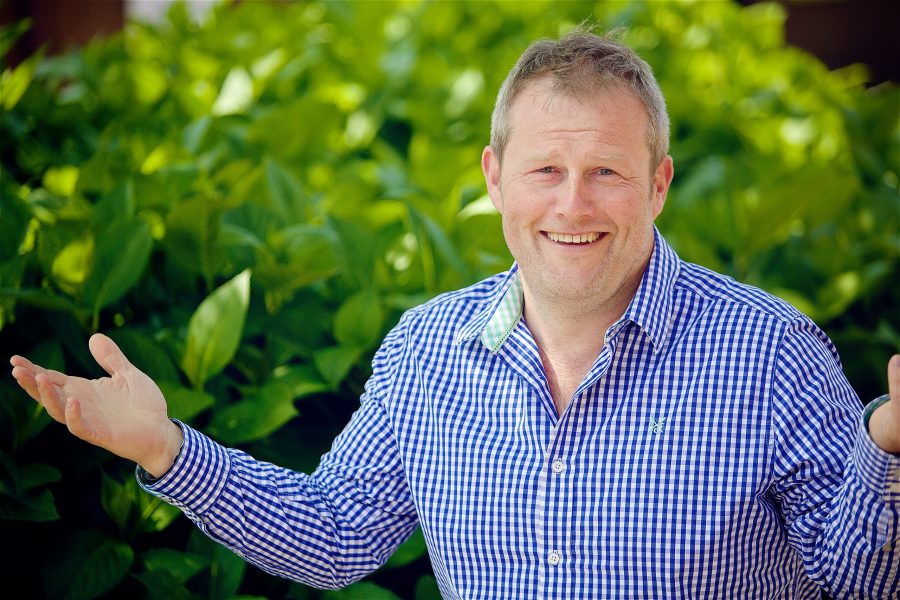 Despite recent, improved temperatures, it’s been a ‘damp squib’ this year,  (for want of a better expression) … and the numbers have been equally disappointing. I’m not referring to my own game here, which is always a bit up and down: I’m referring to the retail sell-through we have seen so far in 2018.

After the gloomy start to the year, it was with some trepidation that I spent most of April charging around the UK, visiting hardware manufacturers to talk numbers. Surprisingly, though, there was a definite air of optimism that I found very encouraging.

So, with a sense of positivity, let’s dig through the market numbers to see if there are any green shoots to discuss.

“It‘s been a bit rubbish, weather-wise, so I’m assuming the market was down?”

“Boo hoo!”, I hear you cry.  And, to some extent, I’d agree with you. But, remind yourselves that 2017 was a great year, so perhaps not the best one to compare to.

It’s not just golf that’s suffered so far this year. In general, less people were out shopping.

It’s also easy to get caught up in our little world of golf, and not look outside the box. Another indicator that’s worth considering is the BRC footfall monitor. In March, this saw a drop of 8.6% in the high-street and 6% overall, versus 2017. So, it’s not just golf that has suffered – in general, less people were out shopping.

For many, the weather seems to be taking the majority of the blame for the fall in golf sales. Mean temperature was well-down; sunshine hours were down 17%; and rainfall, and days of rain, were up 10%. There was also nearly a 40% increase in the number of days with air frost. It was cold and wet. And not great for golf.

However, as previously stated, sales were up on 2016, so let’s crack-on and see what is moving. 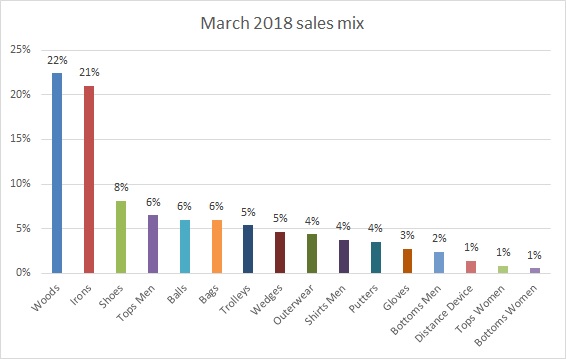 As is often the case, woods and irons dominated the sales chart during March. Clubs accounted for 51.6% of spend – one of the highest for a long time. Other categories indexed at similar proportions for this time of year.

Is it the year of the fitting studio?

Looking at the split between on- and off-course, it really seems to have been the winter of the indoor hitting area…With the on-course seeming to fair much better than expected, (up 19% YoY for clubs). The recent investment by many Pros, of fitting studios and indoor areas, has certainly paid-off this winter. 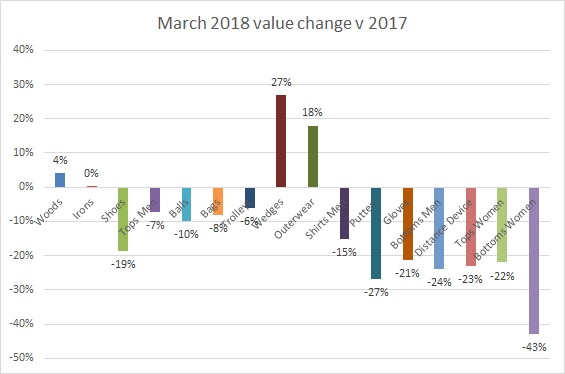 While the increase is small, there is relative growth of clubs v 2017, which, as previously stated, was a strong year. Woods are up 4% and wedges by an amazing 27% in value. Cold and wet weather also helped boost outerwear sales by 18%

The recent investment by many Pros, of fitting studios and indoor areas, has certainly paid-off this winter.

However, everything else is looking pretty sad: pointing to lower participation and generally lower sales, especially of consumables and general apparel. 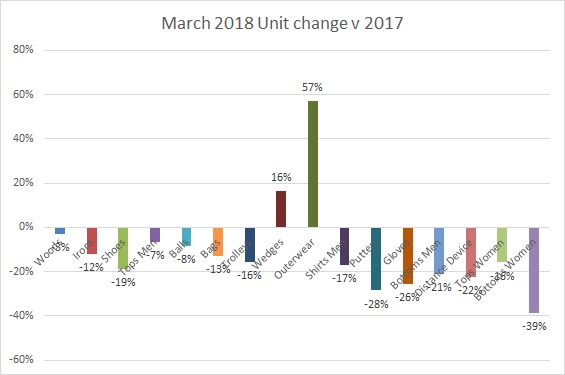 This is clearly shown in the units graph where everything is down, except wedges and outerwear.

So, the Average Selling Price (ASP) must be up for some categories?

Yes, it was for the key club products. ASP has driven the growth in  woods, irons and wedges. Other categories were up in general, but the worrying trend is the continued decline of apparel pricing – especially for ladies clothing. 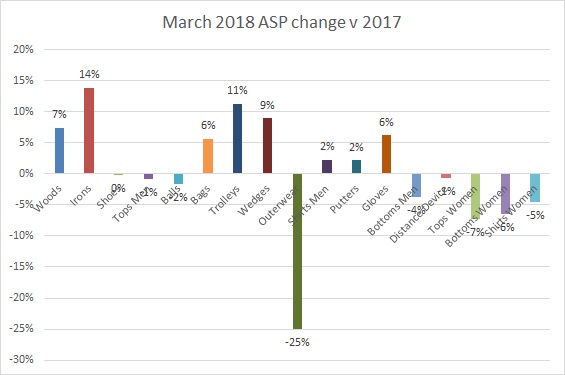 The interesting shift in this graph, however, is the outerwear number, which has seen a drop of 25% year on year in ASP. With the large volume increases, this points to a shift in the market towards lower-priced products.

So, while it’s been a negative month for most, there were some small upsides. Looking forward, let’s hope April’s numbers bring a bit more positivity to what has been a tough start to the year.