Time flies when you are having fun! I really am not sure where the time goes, but more than half the year has flashed past and its time I put some more market stats together.

Back in January when I was staring in to the crystal ball I tried to put some thoughts on the year ahead. I said that the year would be pretty dependent on the weather. That the football championships would create a decline in June figures and that hardware might get a bit of a boost. I also said that I expected to see a reaction from the Off course to grab back some of the share that it has lost last year. Six months on and I can say that I was pretty close on most points – so what has happened?

If we start with the basics – the weather. It certainly wasn’t great weather golf for much of the first half of the year. The start of the year was wetter and milder than average. March – a key month was very wet in southern areas – receiving 150% of the annual average. April was wet everywhere. There was a bit of respite in May but June got a soaking. While temperatures were on a positive side rainfall was 163% and sunshine only 73% of the seasonal averages. All in all not great for getting the average or casual golfer on the course. The retails stats would support this showing a fall in ball unit sales of 7.4% with a rise in weather wear of 7.9%.

So with all that doom and gloom the markets down right?

Well no! According to Golf Datatech numbers the market is actually up in value this year v last year. So far 2.8% YTD. Early momentum in February and March seems to have  continued and the growth has been pretty maintained since February at around 3%

How is that possible?

The off course retailers have been pushing hard and having some good success with apparel and footwear. Seeing some dramatic climbs in shirts and tops – up over 30% in the last 12 months. This has really driven the total market to date. Hardware is also up in 3 out of the 4 key club categories.

So everyone is happy?

Well no. The on course has had a bit of a kicking. Since the start of the year the poor weather has certainly not helped the on course retailer. Things have improved but the market is down around 3% so far this year.

During this period balls have been down over 4% and gloves nearly 3%. That’s a clear indication of reduced footfall. While the off course has seen growth in all apparel, on course has seen a fall in both shirts and bottoms. In comparison weather wear has rocketed away – up 8% on course and 27% off.

Just for reference – in wet years we often see the off course retail channel benefiting.

So was it all doom and gloom?

Nope as I thought there might be, there has been an uplift in hardware – while I didn’t get the right category (woods have been a bit disappointing) there has been strong growth in Irons, Wedges and Putters. This was in both retail channels.

However there is a note of caution. All the rises seem to be coming from higher prices. ASP’s are up a lot in most categories.

All categories except bottoms and shirts have seen big ASP hikes. Putters are up nearly 18% year to date.

While we have seen a positive trend for ASP and Value, we have seen a real drop in units in all categories other than apparel and wedges. Woods and trolleys have really struggled and the hike in putter prices has had a real affect on the units sold – you don’t change them on the turn any more! 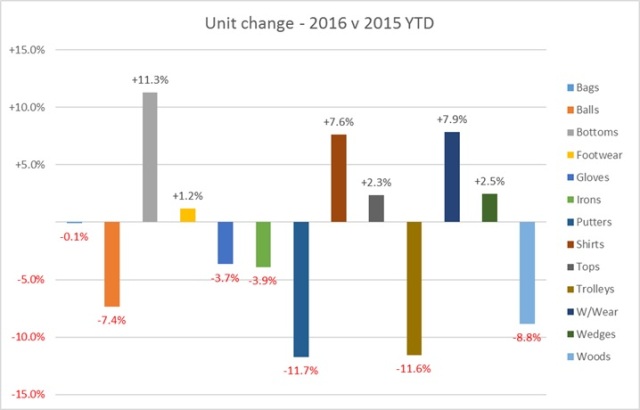 Well the football championships will have had an effect on the July figures – I am sure some of the decline in June will have been partly as a result of the footie. I expect that to affect the larger ticket items the most. The weather was ok so hopefully a few more people got out to play at the start of the summer holidays.

The Olympics will take up quite a lot of attention in August but with the time difference the effect will be limited. With Golf in the games, lets hope it produces a bit of interest and encourages a few more people to go and play golf.

I expect most of the trends to maintain their current movement with the year ending on a slight increase in value. There maybe a decline in apparel and wedge growth as they have been very hot to date. End of season clearance may affect unit sales in a few areas. Stock has appeared to be reducing so there should be less dramatic clearance than there has been in past years.

What ever happens, there is still plenty of opportunity in the season with a few large months left. Here’s to a strong finish to the year.