As the days shorten and the thoughts of Christmas start creeping in, its time for most to wrap up their season. Here are some brief observations about what is going on in the market place at the end of Q3.

Some of the off course guys have done a really good job in a couple of categories this year. There has been lots of promotion and an increased focus on apparel – which seems to have gone really well. Overall the off course was UP 19.7% in September. Some of these gains must have come from the changes in the market. A number of retailers appear to have benefited from a weakened Direct Golf. With one of the prominent discounters at reduced capacity it may have allowed others to make more money and grow ASP.

Overall, off course has had a great year to date. Starting hot and staying there, as the graph below illustrates growth in the last five years.

On course down -1.5% YTD, but things have been getting better.

On course was up in September 0.7%. But it has had a challenging year. Hit with reduced clothing sales it was down -4.5% YTD in April and has been trying to catch up ever since. If it can manage a good Q4,  on course might just pull level at the end of year.

So where is the growth coming from?

The key categories of balls, woods and trolleys are down this year – balls down is generally bad as it means less play. Certainly some of the rounds played stats will support this. However gloves have now moved in to a positive position so maybe its not all bad. Apparel and other hardware have had a strong increase to date. As shown below.

As has been the story of most of the year, value growth is coming from ASP increases. This will probably continue in to 2017 as I expect some chunky price rises all round with the weak £. Next year we could see considerable price inflation with most product costs rising 10 to 20%. As it is, the price changes have been marked across most categories. With the off course increasing prices the most. 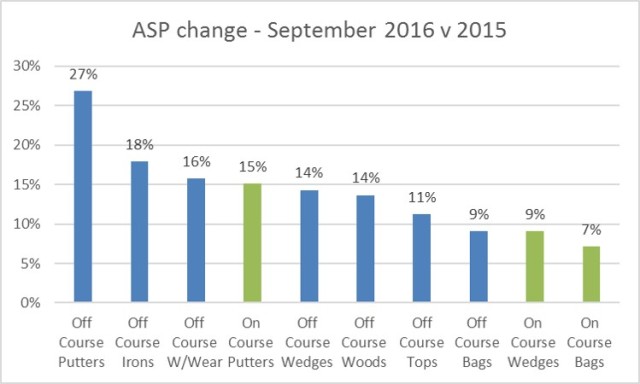 So how does this look in the context of the rest of Europe?

Golf Datatech currently track UK, Germany, Sweden and France, four of the top 10 global golf markets. We have year on year stats for Germany and Sweden. To date the general synopsis is:

So in European terms it appears that the UK is faring pretty well.

Anything else of note to talk about?

The only thing to mention at this point is a worrying inventory trends v 2015. On course is currently up between 15% to 30% across bottoms, shirts and tops. Showing the impact of the sustained sales off course having slowed down the on course clothing. In addition to this ball inventory is up (+7%) and footwear (+22%) in both channels – this is bad! Expect to see some heavy clearing in the next few weeks.

Thats it for now.